10 Nutrients to Look for in a Men's Multivitamin

Let’s be real. Whether you identify as really fit or even just healthyish, you may have some blind spots around nutrition. Hey—no one’s perfect. In fact, you might find comfort in knowing that you’re definitely not alone: According to recent data, men are falling short on key nutrients like magnesium, vitamin A, vitamin D, and more. So, what gives? (1,2)

To be clear, Ritual believes in a “food first” philosophy—that is, you should be aiming to meet the bulk of your daily nutrient needs via a balanced diet. But for certain nutrients, even a great diet can fall short, simply because there are other things that come into play. Factors like genetic variations, dietary restrictions, and other lifestyle preferences can all have an impact on our nutrient intake. And that’s why multivitamins can be important: to help fill nutrient gaps in your diet.

Still, not all multivitamins are created equal. From our POV, a quality multivitamin should have your nutrient needs in mind, with forms that your body can actually use—no shady extras or unnecessary ingredients; no “more is more” approach to nutrients, which can actually get in the way of absorption.

Want an example? While iron plays a really important role in supporting blood health, most men actually get adequate amounts of it through diet alone—and overdoing it on iron can ultimately have a negative impact. Women, on the other hand, need a little more help in the iron department, which is why we recommend that they look for a quality form of iron in their multivitamin. Guys, however? You can probably skip iron in your multi. (3)

All in all, we’ve pored over thousands of studies to identify how nutrient needs shift throughout stages of life—the common gaps, the genetic considerations, the impact of different diets. With all that in mind, our science team has identified 10 key nutrients to look for in a multivitamin for men. Class is in session below. 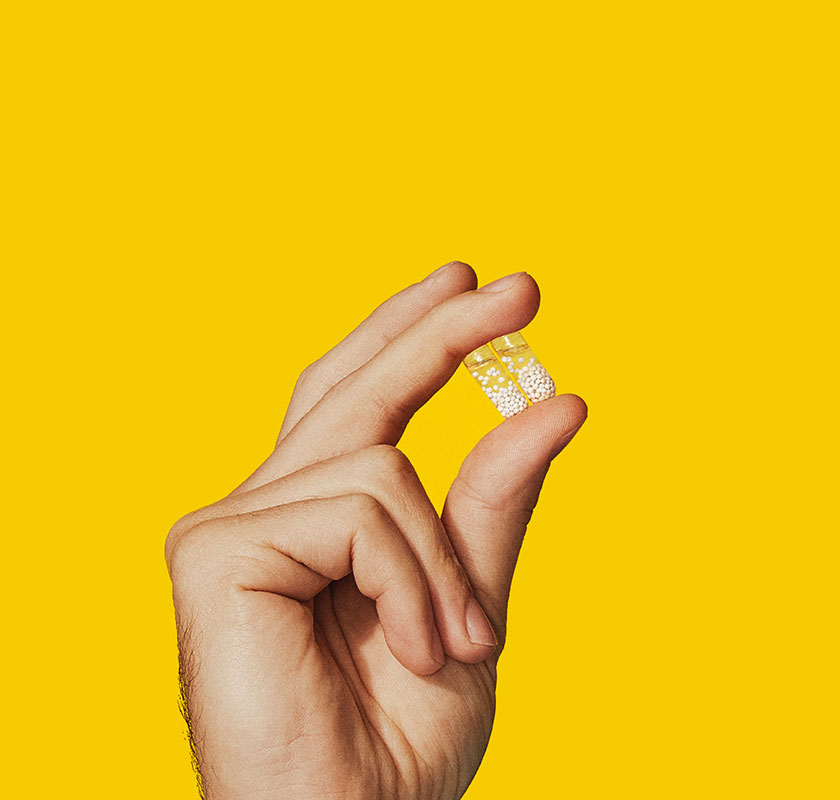 Your nutrient needs evolve over time—just like you. That means trying a multivitamin formulated for your life stage.*
Learn more

Vitamin A. In addition to supporting vision, Vitamin A plays an important role in supporting normal immune function. Multitasking in the name of supporting health? That’s something we can definitely get behind.*

But here’s the thing. While a lot of vitamin A needs can be met through diet alone (you can find it in foods like eggs, dairy, fish, and plant-based options like carrots, sweet potatoes, and leafy greens), men are a bit behind women in meeting their daily levels. That’s why opting for a multivitamin with vitamin A can be a really good idea. (2)

Zinc. While we're on the topic of multitasking, zinc is an important nutrient that helps support normal immune function, along with vision and bone support. Plus men have a higher recommended zinc intake than women—which is why we recommend looking for zinc in a men’s multi.*

Omega-3 DHA. We get it, omega-3—you’re kind of a big deal. Omega-3 DHA fatty acids play an important role in helping support brain, vision, and heart health, which is why it’s a shame that many of us fall short of meeting recommended daily intakes. And since omega-3 DHA is found mainly in fish, it can be extra tricky if you’re vegan or vegetarian.*

That’s where a quality supplement can step in—and ideally a vegan-friendly one, at that. Pro tip: Look for an omega-3 DHA oil sourced from microalgae.

Vitamin D3. Did you know that up to 93% of men ages 19-50 aren’t getting enough vitamin D from their diets? That’s important, considering vitamin D’s role in supporting bone health, normal immune function, and muscle protein synthesis. Filling vitamin D shortfalls isn’t just a question of getting some sun, since factors like climate, SPF, and even skin tone can all have an impact. Instead, opt for a supplement that contains vitamin D3, which is the form of vitamin D your body naturally produces.*

Vitamin E. Fact: Many men aren’t meeting their vitamin E needs through diet alone. And since it’s an antioxidant, vitamin E is a defender you may want on your team. A word to the wise: Look for vitamin E sourced from mixed tocopherols in your multivitamin, since that’s the same spectrum of this nutrient found in a healthy diet.*

Vitamin K2. Suffice to say that K2 kind of flies under the radar, so let’s give this key nutrient some of the attention it deserves. In addition to helping support heart health, vitamin K2 is an important calcium-helper nutrient when it comes to bone support.*

Vitamin B12. B12 plays an important role in contributing to normal cell division. The caveat? Vitamin B12 is found mainly in meat, fish, and eggs, so vegans and vegetarians can have a really tough time getting enough through diet alone. And since B12 also supports energy-yielding metabolism, shortfalls can manifest as sluggishness and brain fog. That’s where a quality multivitamin can really come in handy.*

Folate. This B-vitamin plays a role in DNA methylation and red blood cell formation. You might recognize the name of its synthetic counterpart, folic acid, which is a popular option in many supplements on the market. But there’s actually an important caveat where folic acid is concerned: Up to one-third of men have a genetic variation called MTHFR, which makes it a bit trickier to efficiently utilize folic acid specifically. That’s why we’d opt for methylated folate, which is a bioavailable version. In other words, it can be efficiently utilized—even with that pesky gene variation.*

Magnesium. How well do you really know this powerhouse nutrient? Magnesium lends support to the body in lots of ways, from bone health to normal muscle contraction.*

That said, we need a lot of magnesium to meet our daily levels—men ages 19-50 should aim for a daily intake of roughly 400-420 mg, and many come up short. You can aim to meet your magnesium needs through your diet (dark chocolate, avocado, and nuts are all good sources), but we also recommend taking a quality magnesium supplement to help fill gaps. (Bonus tip: Look for chelated magnesium, which has shown absorbability.)*

Boron. Allow us to introduce you to this unsung hero. Boron does a lot of work behind the scenes to help support bone health—working alongside other nutrients like vitamin D, calcium, and magnesium.*

Most of us know that we need protein, but *why* might be more of a question mark.

The truth is that protein plays an important role in muscle synthesis and maintenance, whether you identify as an athlete or not.
Go deeper

While focusing on micronutrients is critical to optimum health, it's just as important to mind your macros along the way, too—and that includes making sure you're consuming enough protein. Supplementing with a high-quality protein powder designed specifically for your life stage can be a smart way to shore up your intake and support dietary gaps—no matter how old you are.

In a perfect world, you’d get all the nutrients you need through diet alone. But that’s also really tricky, due to a variety of factors ranging from genetic variations to dietary preferences. Your best bet: opting for a quality multivitamin that keeps your needs in mind.

Why You Need Protein