What Is Bioavailability? Here’s Why It’s So Important

The whole point of vitamin supplementation is to support the body’s nutrient needs—which means accounting for the bioavailability of the ingredients is really, really important. Scratching your head? We tapped Ritual’s Senior Scientist, Arianne Vance, MPH, for an easy-to-understand crash course on what, exactly, bioavailability means—and why you should care. Class has commenced!

“In simple terms, bioavailability can be defined as the amount of an ingested dietary ingredient that is absorbed in the gut and made available for use or storage by the body,” explains Arianne. In other words, it’s a measure used to define the percentage of a nutrient (or ingredient) that actually gets absorbed into the body’s tissues. (1,2,3)

“Research has established that the absorption of nonheme iron is increased when consumed with vitamin C, but decreased when consumed with calcium, phytates, and some polyphenols,” says Arianne. “There are, however, certain forms of iron that may be less affected by the presence of such inhibitors. Ferrous bisglycinate is one example: It maintains good bioavailability, even in the presence of phytates.” (4,9)

What’s the relationship between bioavailability and absorption?

They’re pretty similar, actually: Absorption is the process of moving nutrients from the digestive system into the bloodstream, while bioavailability is the amount of a nutrient that reaches the body’s tissues after it is consumed. “In the context of nutrients and other dietary ingredients, bioavailability is similar to absorption,” says Arianne. “In order to show that a nutrient is bioavailable, we first have to show that it is able to be absorbed by the body.” (10) 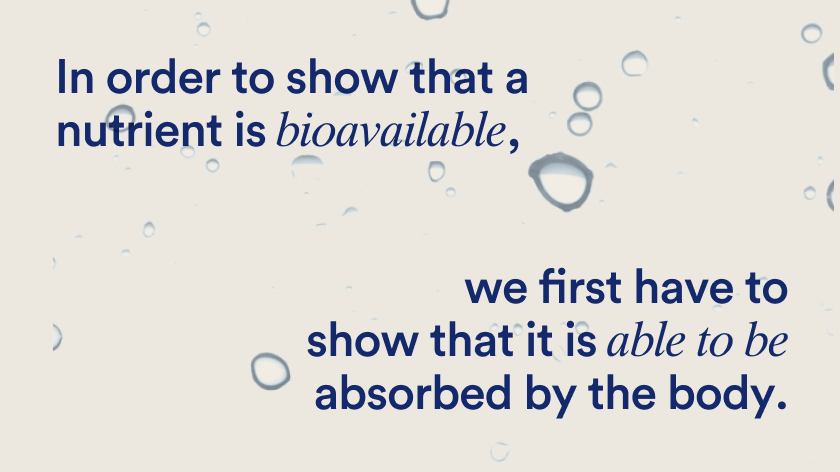 Is there anything that affects bioavailability?

Yes. There are many factors that can impact the bioavailability of nutrients, from the chemical form of the nutrient and the presence (or absence!) of other food components, to individual factors like age and nutrient status. (7,8)

Learn more about the results of our clinical trial here.

How do bioavailable supplements differ from conventional ones?

At Ritual, we can sum it up in two words: Clinical testing. (We prefer parsing through the evidence when it comes to our formulation approach.)*

To us, high-quality supplements include ingredients that have human clinical studies showing that the body is able to absorb that specific form of the ingredient. This third-party litmus test becomes really important when considering a supplement, because as Arianne points out, “Some forms of a nutrient have human clinical studies showing that they’re more readily absorbed by the body than other forms of the same nutrient.”

The takeaway? Shop from brands that rely on evidence from clinical studies to support their claims and formulation decisions.*

Shopping tips from a scientist:

"Nutrient forms matter," says Arianne. "Check the supplement facts panel to identify the forms of the ingredients included in the product, and then look for clinical studies supporting those ingredient forms."*

Shopping for a supplement? Look for clinical testing

“Knowing an ingredient is bioavailable is a great starting point,” says Arianne. “But it’s even better to have evidence from randomized, double-blind, placebo-controlled clinical studies showing that the ingredient causes meaningful changes in the body. This type of study is heralded as the ‘gold standard’ study design, and can help consumers determine how a brand is supporting their claims.”

Take the folate we use in our multivitamins, for example: The bioavailability of the active form of folate, 5-MTHF, is the same as folic acid, a synthetic form of folate. What’s more? Evidence from randomized, double-blind, placebo-controlled clinical studies show that 5-MTHF can also significantly increase red blood cell folate concentrations (an indicator of folate status). In other words, 5-MTHF passes the test: It’s both bioavailable and supported by clinical evidence supporting its efficacy.* (5,6)

Form matters—and we let that ethos guide our formulation process, from ingredient choices to delivery method. “We look for key ingredients with strong human clinical evidence for bioavailability, tolerability, and efficacy,” explains Arianne. “That’s not to mention our delayed-release capsule, which is designed to dissolve later in the small intestine—an optimal place for absorption that helps reduce the chances of sensitive ingredients being exposed to stomach acid.”*

This is all to say: When it comes to formulating multivitamins (not to mention sourcing traceable ingredients), we lead with experience and evidence, not blind faith or pseudoscience. After all, transparency isn’t just about knowing where ingredients come from—it also means shopping from suppliers that show their work and cite their sources, so you can rest assured you’re making the most informed decision possible.*

On that note… Traceability is at the core of everything we do. Here's why that matters.

5 Myths About Clean Products and Packaging, Debunked by Experts