But first, get up to speed on probiotics, prebiotics, and postbiotics—and how they work in tandem to support gut health.

When it comes to creating products that deliver on their promises, clinical testing and evidence-based research have been our M.O. from the beginning. But as a company made up of, well, normal people—aka consumers, just like you—we also recognize that level of integrity may not always be an industry standard. That’s why we go the extra mile to quantify the impact of our products, whenever possible—so you can rest assured you’re making decisions based on sound science… not stealthy marketing.*

Conducting a scientific study was especially important for Synbiotic+, our daily 3-in-1 gut support supplement featuring prebiotics, probiotics, and a postbiotic designed to support gut, digestive, and immune health. The truth is, there’s a lot going on in the gut—it’s an incredibly complex ecosystem made up of trillions and trillions of microbial cells—and ensuring efficacy isn’t as simple as cobbling together the right amount of ingredients, then popping them into a pill. There’s much, much more at play.* (1,2,3)

After all, what good is a gut support supplement if it can’t get to where it needs to go? If the probiotics can’t survive transit through the stomach and small intestine in a viable form—or if the delivery technology isn’t designed to resist the harsh conditions of the upper gastrointestinal tract (not to mention arrive at the colon, an ideal place for probiotic bacteria to thrive)—what’s the point?

Rhetorical questions aside, you can see how important it is to dig deeper into the data, especially when it comes to these matters. And our two-part study did just that.

Bacteria are living things—and just like us, they’re sensitive to their environments (heat, oxygen, light, water, etc.). Since their delicate nature may not do well without protection from harsh stomach acids or bile, in order to ensure the good stuff arrives intact, we tested our capsule technology using a SHIME® model, a scientifically advanced model representing the physiological conditions of the upper gastrointestinal tract.

So, what does SHIME® stand for? Simulator of the Human Intestinal Microbial Ecosystem—a mouthful, we know. Here’s the Reader’s Digest version: Think of SHIME® as a method of digestive survivability testing, a way to understand the fate of the primary ingredients—in our case, probiotics, prebiotics, and a postbiotic in the gastrointestinal tract. To be clear, this is not a requirement for probiotics or gut support supplements. That said, we consider it our duty to go above and beyond in demonstrating the nature of our products, so that you can trust that you’re taking a quality formula.*

It never hurts to brush up on your clinical terminology.
Clinical glossary

→ Why did Ritual choose to do a SHIME® study?

Simple: We wanted to see what happened when we put Synbiotic+ into a model of the human upper gastrointestinal (GI) tract, starting with the stomach followed by the small intestine—in our case, through using a modified version of the SHIME® method, which mimics various human stomach and small intestine conditions in vitro. (FWIW, the SHIME® model is widely heralded as one of the preeminent in vitro technologies available for modeling the combined simulation of the physiological and chemical properties of the gastrointestinal tract.)* 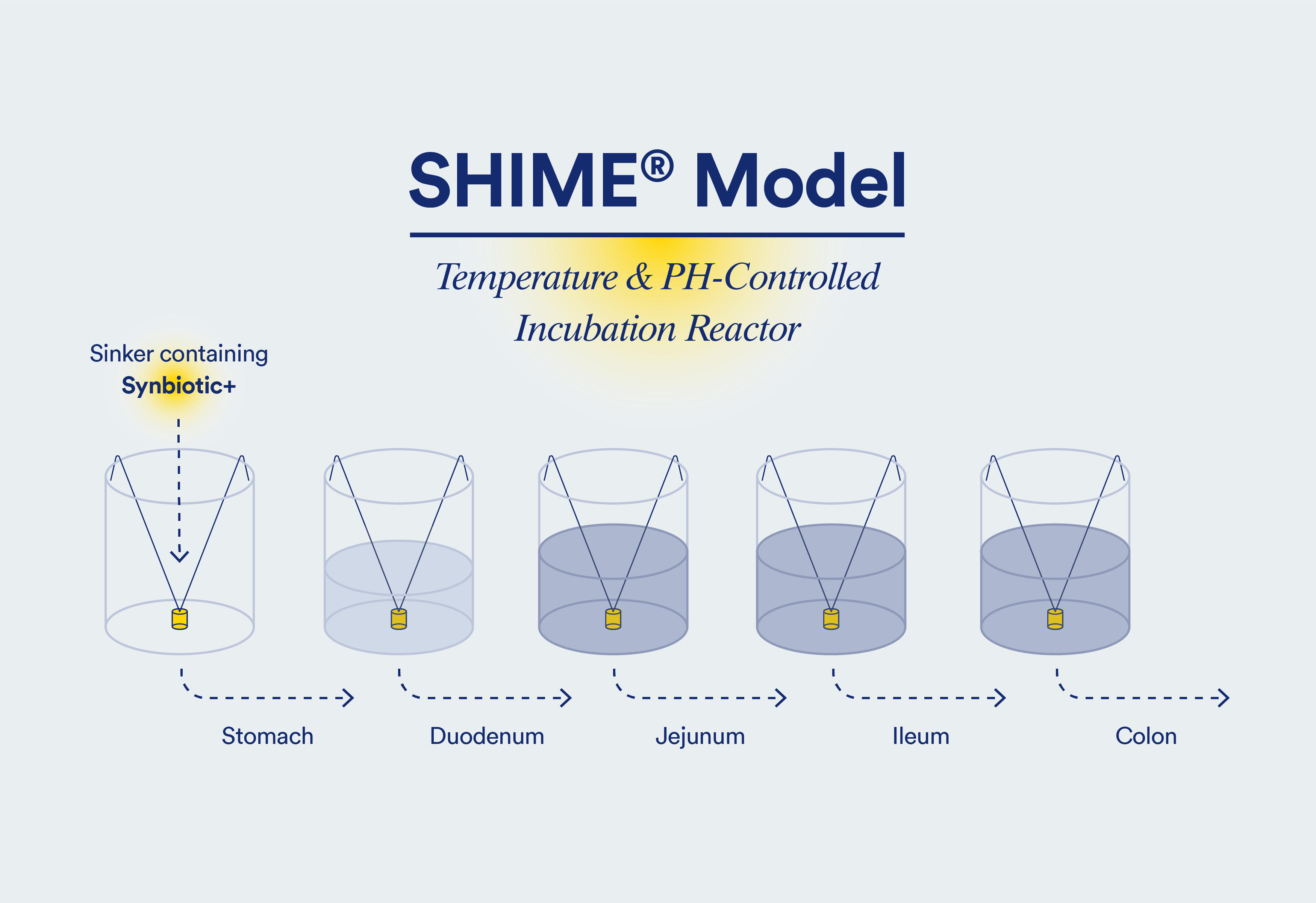 We were also able to compare the behavior of Synbiotic+ being taken after eating food versus an empty stomach—the results of which confirmed that Synbiotic+ can be taken with or without food, without sacrificing probiotic survival. (No statistically significant differences here.)*

→ What are the benefits of an in vitro study?

There are many, particularly when it comes to the gut. For one, it provides unique insights—take a human clinical study on probiotics. Often, all scientists are able to measure is what goes in (in this case, the probiotic) and what comes “out” (stool samples, physical symptoms). “It can be very difficult, if not impossible, to ascertain what is actually happening at each individual stage of the digestive system,” explains Arianne Vance, MPH, Ritual’s Senior Scientist. “While you may see certain outcomes, without visibility into the process, it’s hard to know why those outcomes occurred.”

Put another way, an in vitro study allows us to see the behavior of the capsule and its contents in a way that we couldn’t do in a real human body—giving us more insight into what’s going on mechanistically, and the “whys” behind any outcomes. As a company founded on digging deeper and asking questions, this was a non-negotiable.

Some of the questions we were looking to answer about the performance of Synbiotic+: How does the capsule behave in a model of the upper gastrointestinal tract? Are the prebiotics and probiotics surviving transit through the harsh conditions of the stomach and small intestine? What about the postbiotic—where is it being released?

The data was clear: In our SHIME® study, the majority of probiotics and prebiotics bypassed the stomach and small intestine to be delivered to the colon (which is what we wanted to see). What’s more? The majority of the postbiotic was also released into the small intestine, to be broken down into butyrate—the primary energy source for the cells that line the colon (another huge win).*

In other words, Synbiotic+ arrives at its intended destination, with all the key ingredients alive and present in the intended amounts—and we have the studies to back it up.*

→ What was the study design, and why did Ritual choose to do one?

Part 1 of our study—the SHIME® study—showed us what physically happened to the capsule and ingredients once inside a model of the GI tract. But what it didn’t reveal was the actual impact of Synbiotic+ in a model of the colon once ingested, which is another important element.

Part 2 of our study, also conducted in partnership with ProDigest (one of the world’s leading experts in in vitro simulations of the GI tract), measured the physiological changes in a colon model that were associated with Synbiotic+. Like part 1, it was an in vitro study design, only this time, we were tracking changes as modeled in a human colon (versus the upper gastrointestinal tract). To do this, we used a donor fecal sample to recreate the conditions of a human microbiome in vitro.*

There were two parts to this study. One looked at the impact of Synbiotic+ on short-term colonic fermentation and the other assessed gut barrier function in vitro.*

Another winner. Not only were the ingredients in Synbiotic+ shown to work better together to support production of butyrate (a major source of energy for the cells that line the colon) in vitro, but Synbiotic+ was also shown to significantly increase the growth of beneficial bacteria along with microbial diversity. What’s more? In our study, Synbiotic+ was shown to support gut barrier function, too.*

Courtney Cho is a health and wellness writer who has covered a wide variety of industry topics, from the science of nutrition and gut health to clinical testing and greenwashing. After earning her B.A. from The University of North Carolina at Chapel Hill, where she specialized in journalism and reporting, her career has focused on the intersection between clean products, ingredient transparency, and science-backed wellness—and how everyday habits can contribute profoundly to our quality of life.

Courtney Cho is a health and wellness writer who has covered a wide variety of industry topics, from the science of nutrition and gut health to clinical testing and greenwashing. After earning her B.A. from The University of North Carolina at Chapel Hill, where she specialized in journalism and reporting, her career has focused on the intersection between clean products, ingredient transparency, and science-backed wellness—and how everyday habits can contribute profoundly to our quality of life.

Probiotics 101: A Beginner's Guide to Probiotics