Since 1960, the average life expectancy in the U.S. has increased by nine years—and according to the Social Security Administration, individuals who are currently approaching the age of 65 can expect, on average, to live until their mid-80s (84 for men and 86.5 for women). But many individuals live well beyond the average. Between 2000 and 2014, the number of living centenarians (individuals who live to be 100 years old) increased 43.6 percent from 50,281 to 72,197. With high life expectancies and advances in healthcare and technology, people are living young lifestyles later in life. A critical component of feeling young is supporting areas of overall health and wellbeing. (As a reminder, these are some of the ways we define “healthy aging.”) (1,2)

For those who prioritize living a healthy lifestyle well into their golden years, where you live can actually be a big factor: Some cities offer better opportunities for continued physical, mental, and emotional wellbeing. To find out which cities are best for supporting healthy aging, we used data from federal agencies including the U.S. Census Bureau and the Center for Disease Control and Prevention to identify the best cities for healthy aging based on 17 factors that fall into one of three broad categories: health care and outcomes, community, and general livability.

Here’s what we found:

Ritual considered many factors related to residents’ health care, including the rate of physical activity, the availability of health care and social assistance facilities, certain lifestyle habits, and the percentage of the population that reports being in very good or excellent health. Cities in the West, especially in California, are rated very highly in these areas, while those in the South and the Great Lakes region tend to score a little lower. 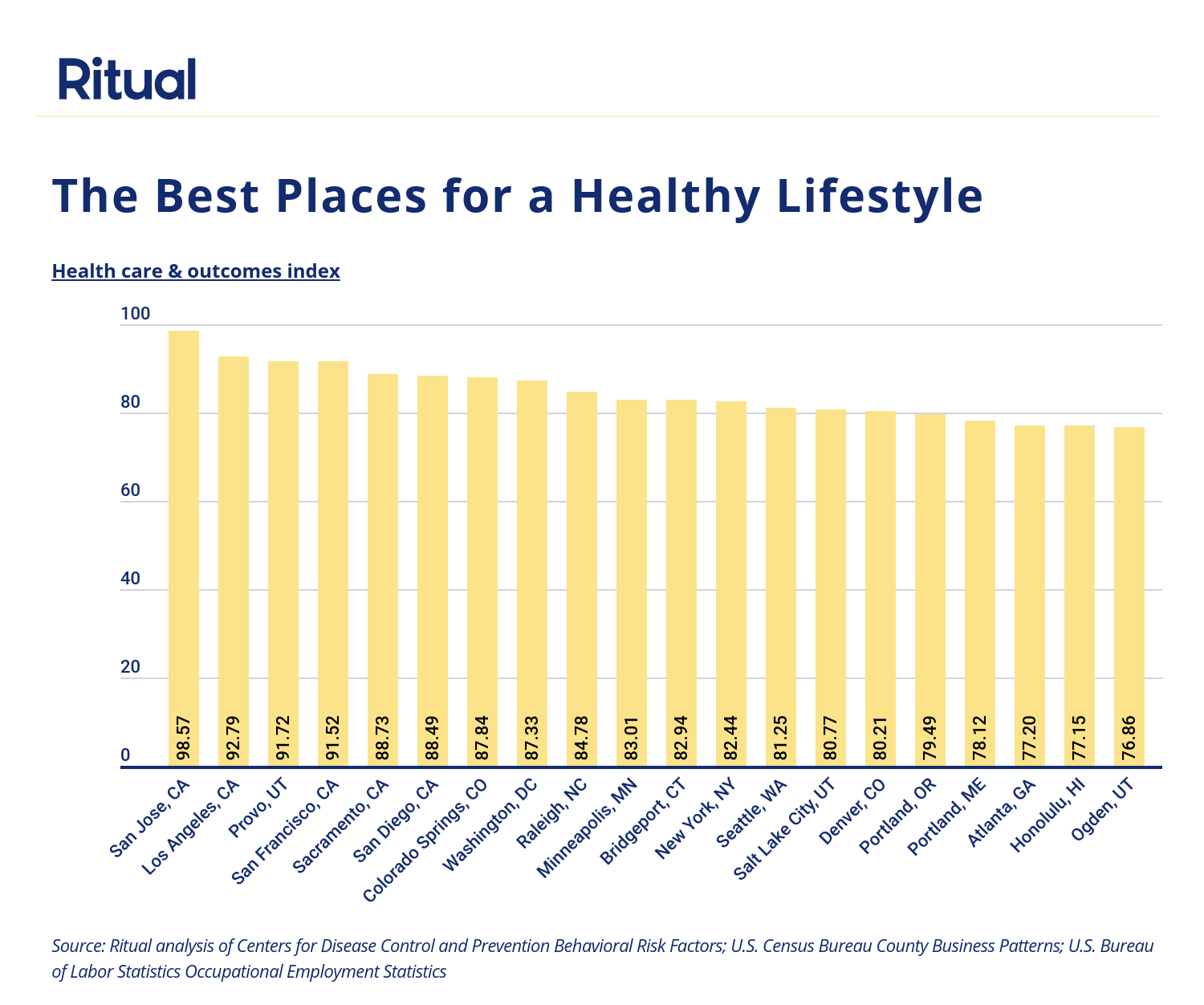 Studies have shown that engaging in certain cultural activities and social events can contribute to improved wellbeing. Based on these findings, Ritual considered the availability of arts, entertainment, and recreational facilities, as well as civic and religious organizations within each city. Since educational attainment is also correlated with higher life expectancy, the analysis looked at the percentage of residents who have earned a bachelor's degree or higher. In general, cities in the South and the West did not fare as well by these measures as cities in the Midwest and the East. 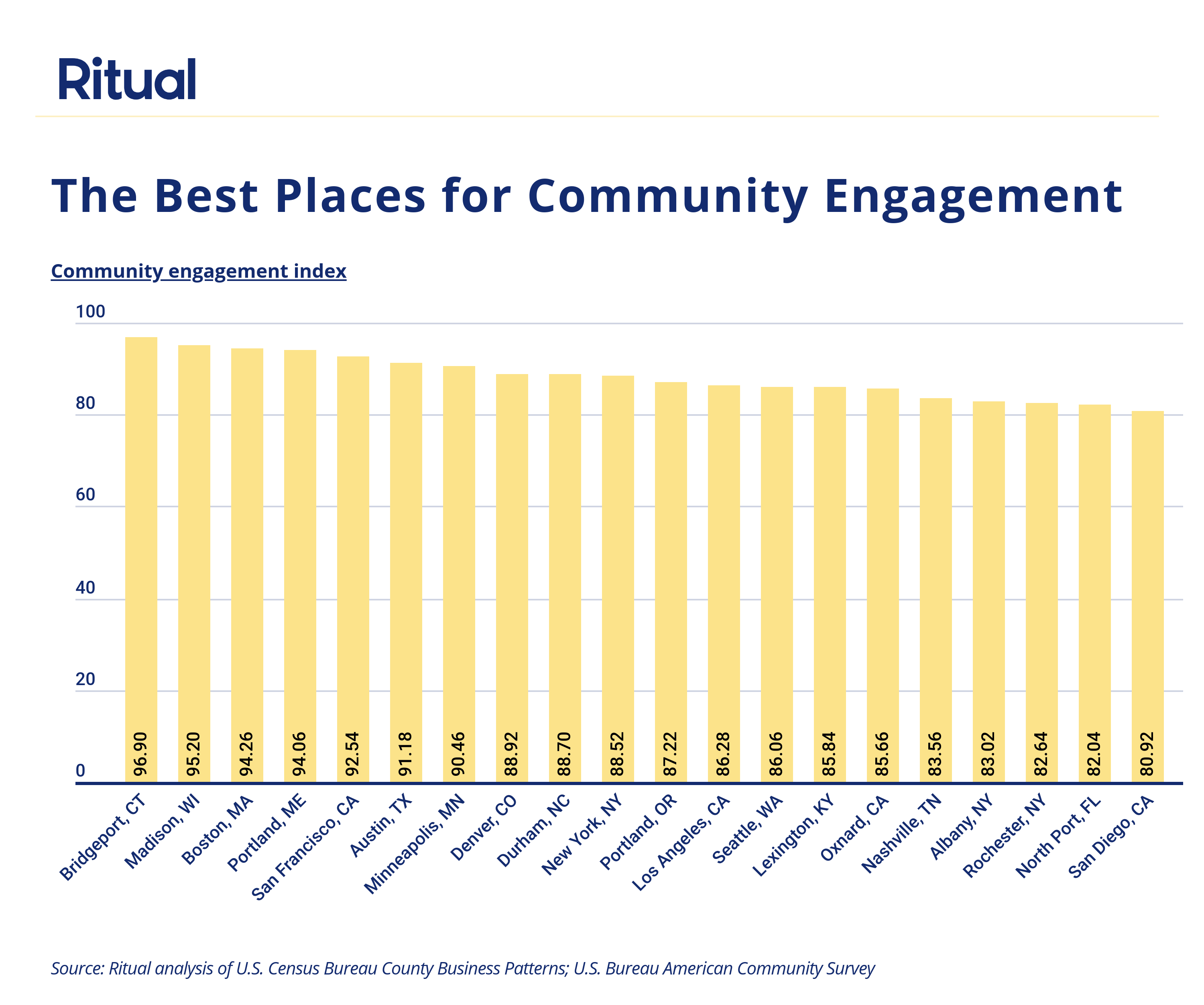 The economy and physical characteristics of a city are major influences on its “livability” and how conducive it is for supporting healthy aging. To gauge general livability, Ritual looked at factors such as the unemployment rate, unemployment for residents aged 65-74, poverty rate, poverty rate for residents aged 65-74, percentage of commuters who walk or bike to work, mean commute time, weather, violent crime rate, and property crime rate. The best cities for general livability tend to be located on the northern or central regions of the coasts, while areas in the Southeast and Southwest rank lower.

Here's how our scientists define it. 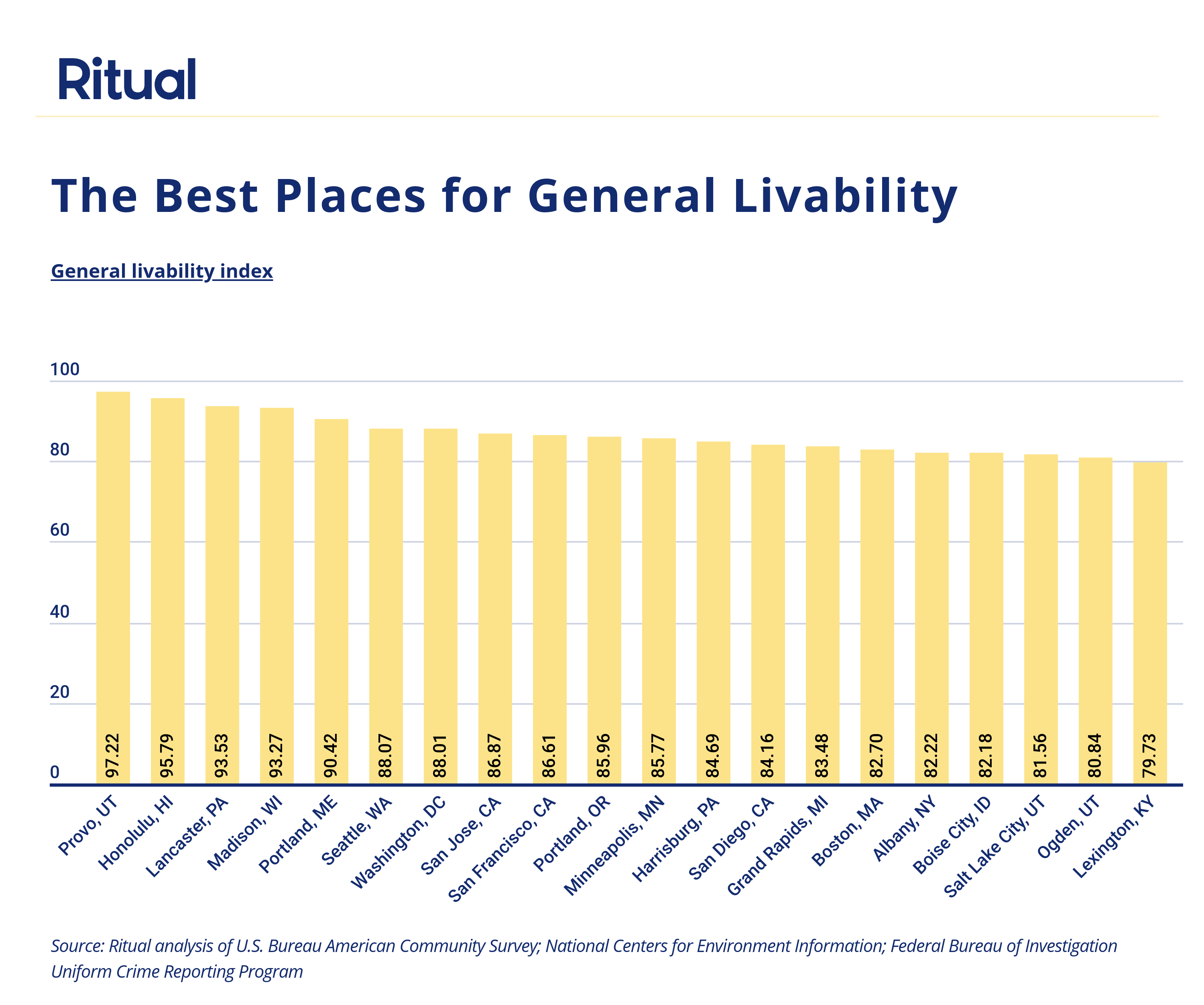 Let’s break it down and take a deeper look.

San Francisco’s mild climate is highly conducive for outdoor activities and living a healthy lifestyle. Walking and biking to work is extremely common, and the obesity rate in San Francisco is much lower compared to most other cities. Golden Gate Park is one of the city’s most prominent green spaces, providing ample opportunities for walking, hiking, camping, and learning about the region’s history. This foodie’s paradise also offers healthy dining options, farmer’s markets, and other ways to maintain a healthy diet.

Health outcomes for Provo-Orem are some of the best overall in the country. Among large cities, Provo-Orem has the lowest percentages of adults who smoke and adults who binge drink. In addition, Provo-Orem residents have the highest physical activity rate in the U.S. The city makes it both easy and fun to stay active. Bike pathways, zip lines through Bear Pine Canyon, and water sports on the Provo River are a few of the ways that residents get their exercise and their entertainment.

Portland residents are significantly healthier than residents in the average U.S. metro, as it features the highest percentage of residents who report they are in good or excellent health. The city’s numerous walking trails, ski slopes, and beaches enable residents to stay active throughout the year and take advantage of the region’s diverse climate. Getting involved with one of the community gardens is also an excellent way to grow healthy food and develop a social group.

San Jose is widely considered the heart of Silicon Valley, but there’s much more to this city than tech companies. For those who love the great outdoors, San Jose is in close proximity to the Santa Cruz Mountains, the Pacific Ocean, Yosemite National Park, and Lake Tahoe, all of which offer opportunities for fun exercise and adventure sports. The percentage of people that walk to work in San Jose is significantly above average, a reflection of the metro’s walkability. San Jose also has the lowest obesity rate among all large cities in the country.

Located along the Long Island Sound, Bridgeport is a port city with five historic districts. The metro’s residents are more likely than residents in most other metros to have earned a bachelor’s degree with nearby universities including the University of Connecticut-Stamford, Fairfield University, and Sacred Heart University. Residents of the Bridgeport metro area are also less likely to be obese. With such close proximity to the water, residents can visit the public beaches at Cove Island Park and Cummings Park to swim, sunbathe, or go for a jog along the shore.

Twin Cities residents are far more likely than residents in other metros to consider themselves in very good or excellent health. Minnesota has earned its moniker the Land of 10,000 Lakes, and those living in Minneapolis-St. Paul can use the lakes for year-round exercise like hockey in the winter and kayaking in the summer. In addition, the local Wirth Winter Recreation Area Trails are perfect for skiing. During the spring and summer, residents can also enjoy jogging in the city’s many parks and wetlands.

History buffs will love the greater Washington D.C. metro area and its easy access to institutions like the Smithsonian. Like many of the other cities on this list, Washington D.C. boasts one of the highest percentages of residents with a bachelor’s degree. The nearby Shenandoah National Park and Great Falls State Park provide green spaces for exercise and exploration. Similarly, the cities of Arlington and Alexandria are only a few stops away on the metro system, connecting residents to historic sites like Arlington National Cemetery and Mount Vernon.

San Diego has one of the most pleasant climates in the country and is famous for its sunshine and beaches. The temperate weather fosters a love of the outdoors and encourages residents to maintain an active lifestyle with its numerous hiking trails, beach sports, and sporting facilities like golf courses and tennis courts. San Diego is also home to the famous San Diego Zoo and beautiful Balboa Park.

On average, Seattle residents are well educated and physically active.The city is known for its breathtaking landscape, including natural wonders like Mount Rainier and the Puget Sound. Seattle offers a variety of activities such as attending live outdoor performances, chatting with friends in one of the city’s numerous coffee shops, or escaping to local ski resorts, hiking trails, and state parks. The variety of activities enables Seattle residents to maintain excellent mental, emotional, and physical health.

Situated in the lush landscape of the Pacific Northwest, Portland boasts numerous urban parks, as well as adventure activities such as hiking in the nearby mountains or exploring the Columbia River Gorge. For those who enjoy riding bikes, bike-sharing is a common and healthy way to travel around the city. It’s also easy to eat healthy in Portland, especially with its plethora of restaurants specializing in vegan, vegetarian, and Paleo cuisine.

Among all large cities, Los Angeles has the lowest rate of depression among its residents. Los Angeles is also well-known for the diversity of its residents and things to do. Earning its nickname as the Entertainment Capital of the World, Los Angeles has the most arts, entertainment, and recreational facilities relative to its population. The city’s year-round sunny weather encourages residents to spend a lot of time outside in the surrounding area’s diverse landscape including beaches, mountains, and forests.

The Boston area’s numerous colleges and universities, including Harvard, MIT, and Boston College, have made it one of the most educated cities in the U.S. This densely populated city offers one of the highest concentrations of arts, entertainment, and recreational facilities, including the New England Aquarium and Museum of Fine Arts. Walking along the Freedom Trail and other historic sites is an excellent way to enrich both the body and the mind.

Nestled in the heart of the Rocky Mountains, the Mile High City is home to numerous parks, golf courses, and ski resorts that beckon residents to spend time being active outdoors. Since maintaining balance is important for good health, less strenuous cultural enrichment options include attending sports games or shows at the performing arts complex. Due to the city’s high altitude, Denverites are advised to take care of their health by drinking more water and adjusting their diet and physical activity level as needed.

To identify the best metropolitan areas for healthy aging, a composite score was created based on the following metrics:

How We Define "Healthy Aging"