"I've had more business cards than I can count," laughs Dian Griesel. It's an apt description for a career that otherwise defies definition. "Reinvention" doesn't seem like the right word for someone who has always embraced an identity as a wearer of many hats—this is just, at her core, who Griesel is. She has owned and helmed a PR firm for 30 years, she's an author, she is, as of a few years ago, a model with Wilhelmina. She teaches self-hypnosis as a meditation technique and consults CEOs of publicly traded companies. And as far as Griesel is concerned, she's just getting started.

With this kind of CV, it's hard to believe that there's anyone better suited to spearhead a new conversation around aging—or rather, flip any preconceived notions about the 50+ set on their head. And that's precisely the M.O. of Griesel's online community (did we mention she's also an incredibly successful blogger?), Silver Disobedience. Half a million readers devour her daily posts which span music, travel, career pointers, and interviews with notable authors. It ultimately reads like a guide to a life truly well-lived. And it's clear after a few conversations with Griesel that she embodies every word she writes.

According to research, our 50s are the most optimistic time of our lives (1).

As we talk about her fascinating career and the rituals that get her going every day, Griesel's laugh and general joie de vivre are nothing short of infectious. So too is the way she chooses to treat her moments of vulnerability: Insecurity is inevitable, she says, so why not lean into the discomfort and know that it could mean something great?

More on that can't-miss advice below—along with her go-to habits, thoughts on imposter syndrome, and what she has planned for the future. 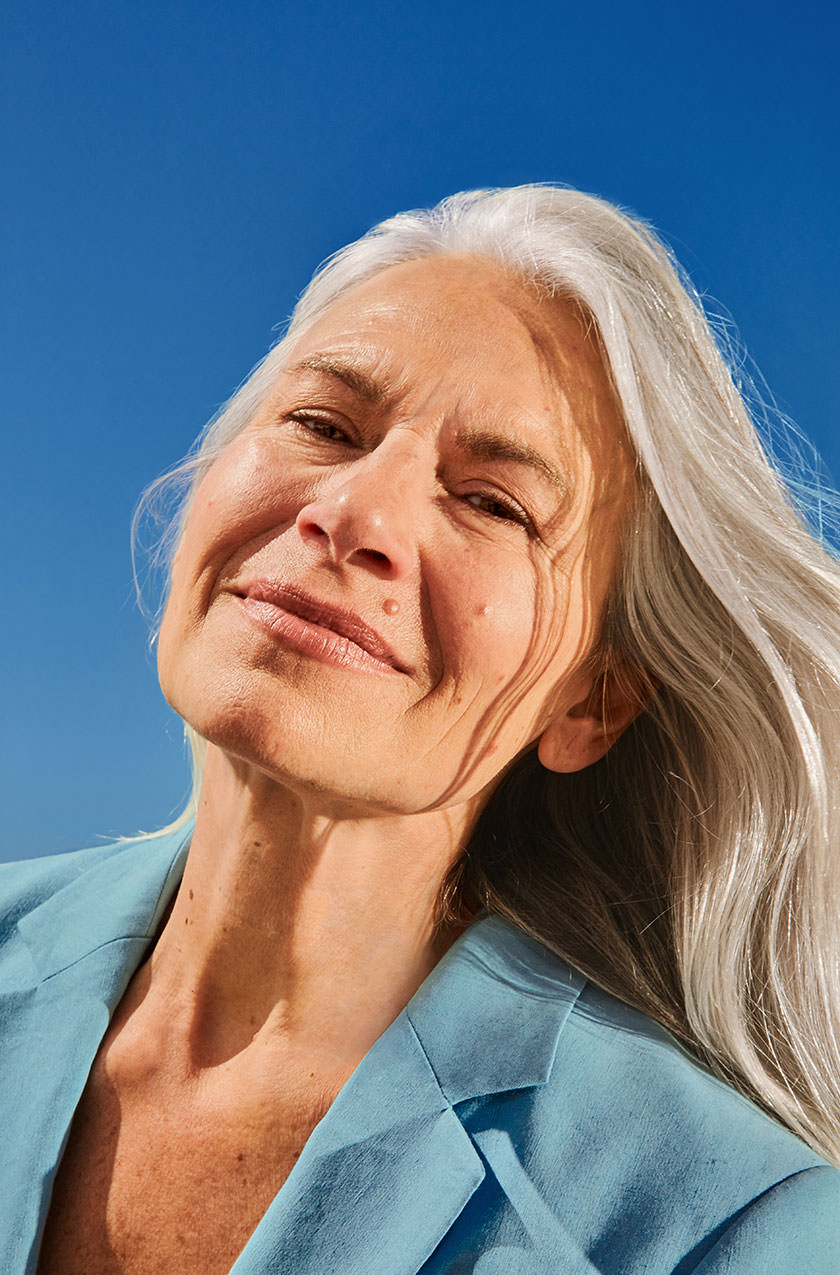 Meet the multivitamin formulated to help support healthy aging from within.*

On embracing social media as a medium…

"It really coincided with me starting work as a model. You have to have an Instagram page. So I thought, Oh my gosh, my clients are going to think I'm having a midlife crisis. And I could understand why they would think [that] because I used to joke when I would see people doing exactly what I do now. But that's kind of how things evolved.

"I had a Facebook account from work, and I had never posted anything on it—not ever. But then one day, I created a post and asked: "Is age a number or an attitude?" And over 2,500 people responded to that first post with really heartfelt, detailed, essay-like comments. That kind of got things going. So I just kept writing every day—I kept exploring that idea of life, how we feel about ourselves, what changes [we notice] as we get older. Your reaction when you look at yourself in a selfie and you notice your neck looks a lot older than it was the day before. You dry your hair and your head's upside down and you notice your face has totally shifted. These were the kinds of realizations I started to write about."

Writing about positive emotions for just two minutes every day might be enough to improve wellbeing, according to research published in the British Journal of Health Psychology (3).

On building (and knocking down) her own obstacles…

"You know, I have to say the only prejudices I think I've ever felt as a woman—and maybe because it's I'm self-employed and have always been self employed—are the ones I put up against myself. I believe I've been my own worst enemy at times. This is why I think my blog resonates, because I talk about that a lot: It's our own insecurities, our own worries about who we are and where we're going, or are we enough that sabotage us more than anyone or anything else. Because if we're feeling good about ourselves, [no matter what] anybody says, we can take it with a lot of humor or a totally different attitude.

"I'm a big believer that we all suffer to some degree of the imposter syndrome. Oh my gosh, how did I get here and do I belong here? We've all had those moments."

"I've learned, I've grown, I've learned to ask questions when you don't know. And I've pretty much run my business with people for many years now with the thought: Speak up. Because if you have a question, odds are there are plenty of other people in that room that are having the same question. Be the brave one to just put it out on the table."

On the power of feeling a little uncomfortable…

"I do think there's a lot of power in the unknown and embracing it and saying, what the heck? What's the worst that can happen here?" 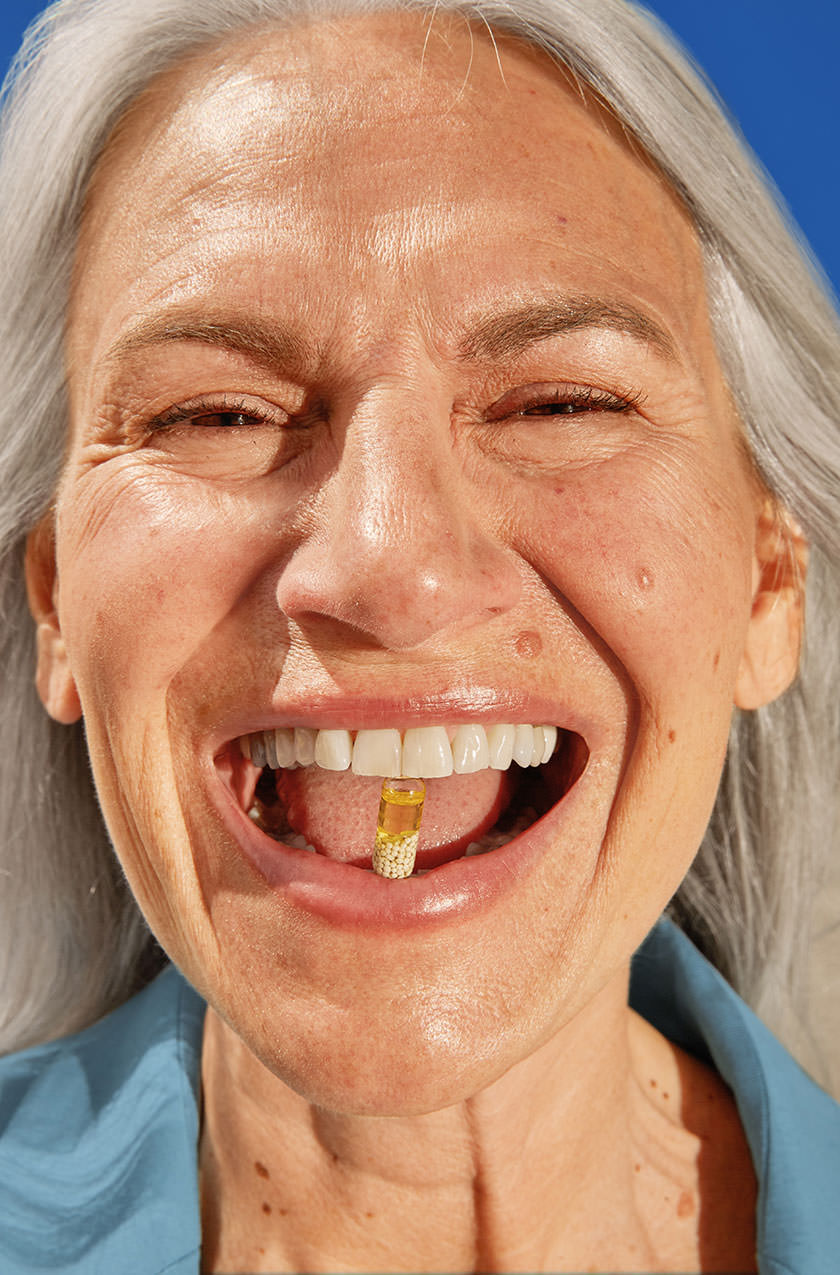 "Seriously—take the jump. Because, okay: You might fall, you might stumble, you might make a jackass out of yourself. But what difference does it make? Life is about calculated risks. Your pride and your ego are incredibly resilient."

Scientists estimate that we get 20 to 30 percent of our daily fluid intake from foods—especially if you're filling up on fresh fruits and vegetables.*
Learn more

On the daily rituals that set her up for success…

"I have a lot of habits that I try to stick to. I wake up and I have four glasses of water before I allow myself that first cappuccino, no matter how much I want it! [laughs] If I ever drink alcohol, oh, I drink water for every sip.

"I am also a big fruit and vegetable eater. I like to keep everything natural as much as possible. I can't say I never have sugar, but I keep it as natural as possible whenever I can. Other rituals for me are meditating. I've been meditating for close to 30 years now. So whether it's a form of self-hypnosis, which I do a lot of and teach, or just sitting and meditating or rocking in a chair till I get myself into that state of meditation, I do that regularly."

"I'm tired of being told to slow down when I'm just getting started."

On making herself a priority…

"My biggest plan for the future is to continue working on myself. I'm a big believer in the idea that the more you focus on yourself, the better the world is. And I don't mean that in a selfish way, although being a little selfish is an important thing."

"You've seen it on every plane: If you don't put on your own oxygen mask first, it's very hard to take care of everybody else."

When we brag about ourselves, our brain logs a familiar pleasure sensation—similar to the kind we often feel from food or sex.* (4)

On learning to celebrate ourselves…

"I'm committed. If I start to do something, I'm going to try to do it every day with commitment and passion along the way."