It wouldn't be a stretch to look at a business like One Kings Lane and assume that every proverbial brick was placed before it opened its doors; that there was no detail overlooked and every aspect was obsessively thought out, all but guaranteeing its prosperity. But co-founder Susan Feldman tells a much different story about launching the luxury home decor destination. In fact, says Feldman, it was the willingness to be a little less precious that was ultimately integral to the company's overwhelming success—she got to a point when she knew it was time, ready or not, to put her idea out to the world. And by knowing and anticipating that there would certainly be failures and lessons to be learned, she and her team were that much better able to adapt along the way.

At the time of One Kings Lane's launch, Feldman was 53—and ultimately, the labor-of-love project that she chose over retirement was life-affirming in the sense that she realized that her age and experience gave her a unique power to execute on an idea and turn it into a full-fledged business. Most of all, she had the perspective to understand how setbacks can transform something for the better—wisdom that might have been more difficult to grasp in, say, her twenties.

That's why, after selling One Kings Lane a few years ago, Feldman has doubled down on a new mission to empower women over 50 to see the limitless potential these decades hold—and part of that, of course, is dismantling all the outdated ways the media still speaks to people of a certain age. This all led to the launch of her second business, an online platform called Get in the Groove, which touts itself as a "lifestyle destination for age-defying women."

"It's just like, ‘Nope,' she says of those who would suggest that life slows down after 50. "We are healthier, more engaged and more physically fit than any generation before us." Keep reading to see how Feldman embodies that M.O. in her own life—and why millennials should be more excited than ever about growing up. 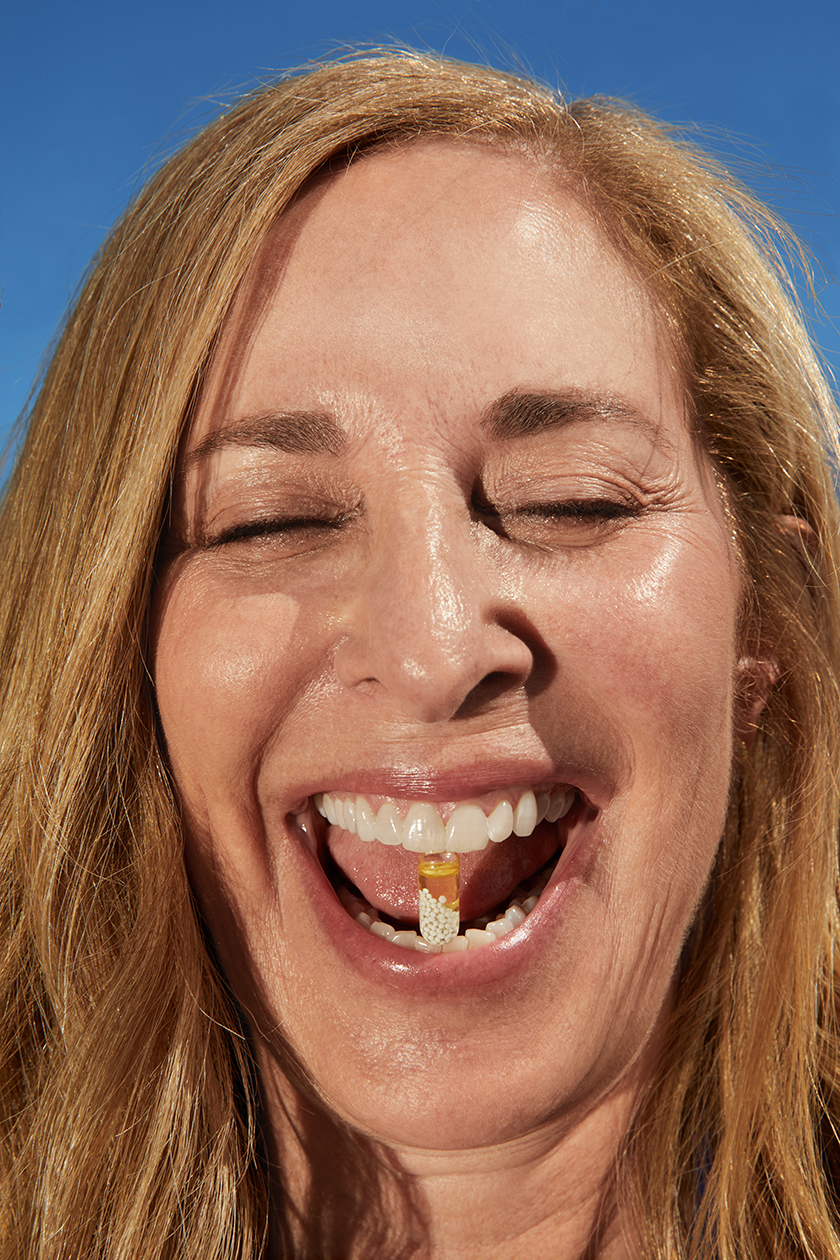 On starting a new business quite literally from her home…

“The [retail] industry had changed so dramatically—just everything about it. It wasn't as much fun as it was when I started. I was at a typical point in my life—I was 53 at the time—where I was like, 'This isn't fun anymore. Either I can just retire, or I can go do this thing that I've been thinking about for the last year.' And that was One Kings Lane.

“This was the impetus: When we moved to LA, we bought this house in West Hollywood and I realized later that it was the first time I had lived in a house since I left my parents house to go to college. I'd always lived in apartments. When we bought this house, I became a freaking lunatic, in terms of energy needed to decorate everything and anything that had to do with the house. It was sort of an interesting time, because we moved out here in 2005, and around 2007 flash sale platforms like Gilt and Rue La La began to emerge. I was really fascinated by what they were doing, because it was a whole new channel of distribution that was so new, and nothing had been this new in a very long time in the industry.

“I thought to myself, ‘Well, you know, it's kind of interesting. I can't find what I want online for my home,' because there just were not very many interesting websites selling unique products at that time for the home. Why couldn't I do what they're doing in apparel, and do it for home? That was really where the seed of where One Kings Lane came from.”

“In 2009, I met my business partner, Ali Pincus. That's a whole other crazy story. We formed our company in November 2008, and launched One Kings Lane in March 2009, and never looked back. It was a wild ride, for sure.”

On the decision to bring a good idea to life…

"It was percolating or marinading for well over a year. I just kept talking about it. I had been a successful businessperson basically my whole career, but the idea of actually stepping out and doing something on my own was pretty scary, I guess. I don't think I even acknowledged how scary it was. I don't know if I said it that day, but I'm fortunate that I have a husband who's incredibly supportive and he has actually helped me a lot sort of through a business standpoint. He helped frame it in a way that made it seem like, how could I not do this? He said, “Either go out and try to do this, because if it doesn't work, what's the worst that will happen? It will fail. You can manage what that failing looks like. Or you should stop talking about it cause you're driving me crazy.'

The research on the value of failure is so promising, that Columbia University is building an entire center devoted to understanding what we can learn from setbacks. (1)

On seeing perfection as a potential setback…

"Somebody had told us: ‘If you're going to do it, move fast.' A lot of times you see this with entrepreneurs—they want to wait and make sure that everything is absolutely perfect. The advice was, it doesn't have to be perfect. It should be, obviously, credible. It should be good and well-executed. But it was really about getting out there, because we were first to market in this area. We got it going, and it was intense, but it was exciting and really cool to actually have a vision and then execute against it.”

“‘Make yourself’ means understanding what it is that you enjoy and makes you happy, and figuring out how to take that and apply it to different parts of your life.”

One-third of women in their mid-to-late sixties are still in the workforce (up from 15% in the 1980s)—and many report that's very much for their own enjoyment. (2)

On noticing an obvious gap in the age conversation…

“I had been so heads down for basically seven years with One Kings Lane. I think being part of a startup, and being surrounded by lots of young people—and I guess, being the boss and the visionary—I didn't feel what, I think, a lot of my friends and colleagues were feeling as they reached 50. I started talking to a lot of women and hearing about their experiences, and it was actually pretty disturbing to me. Things like: 'I feel invisible. I feel irrelevant. I feel really out of it. I don't feel good.'

“The thing is, in the second half of your life, you have a lot to look forward to, and there are things you can be doing to feel good and look better and be a part of the conversation. Nobody was really doing anything online. I thought about it as an opportunity. It just looked like a huge white space to me, that I felt like somebody should do something about it. I guess that was going to be me.”

"I kept talking to more and more women, and hearing the same story. It didn't matter who they were; if they worked, if they didn't work, married, not married, kids, or no kids."

“Nobody feels their age. Yeah, we all have aches and pains, but whatever, that’s fine.

“It’s such a cool moment to have that opportunity to do things that you couldn't do before. Now you have resources to go and do, and check things off your list, or start something new or take the time to learn something. It should be an amazing time. That’s why there are a lot of people that are trying to change their conversation. And this conversation with younger people is actually really great. It's a big thing when you could show them like, ‘Hey, look at these people. They're 60, or they're 58, or 52, or whatever.’ They're like, ‘Wow, that's really cool.’ You know? It helps change the conversation.”

Research suggests that those who log early morning workouts can actually shift their internal body clock earlier, making them more alert in the AM. (In other words, exercising first thing might be the secret to becoming a morning person.) (3)

On her #1 self-care strategy…

“I had always exercised, but then when I got married and had kids, I just gave up all the stuff that was good for me. I stopped exercising and doing things that [I realize now] would actually make me better at everything that I was doing. So exercise for me has become really important since then, even with One Kings Lane. As crazy as this sounds, I would wake up every morning at 4:30, which is an insane hour, but I couldn't sleep. My brain would just turn on. I would get up, I'd go to the computer for like 30 minutes, and then I would go work out for an hour before the day started. I knew that if I couldn't do it in the morning, it wouldn't happen. I actually like to exercise in the morning.

“For me that has become a ritual: I try to work out five to six mornings a week. I do different things, but that's really important to me. When I don't do that, I don't feel good. Even all through One Kings Lane, and the ascent of the business and traveling like crazy, I always found time even if it was just get on an elliptical or something for 30 minutes. That's probably my biggest thing."

"We are healthier, more engaged and more physically fit than any generation before us. Nobody feels their age."

On defining what ‘make yourself’ means to her…

“It's learning to be honest with yourself about what those things are that you do enjoy. And then, it's how you take that and then transfer those qualities to all the other parts of your life, from the person that you end up being with, to your job, to what you do outside of work.”

Keep an eye out for the upcoming launch of Essential for Women 50+, the multivitamin we formulated to support healthy aging from within.

Angelique Miles Wants to Tell You How Old She Is